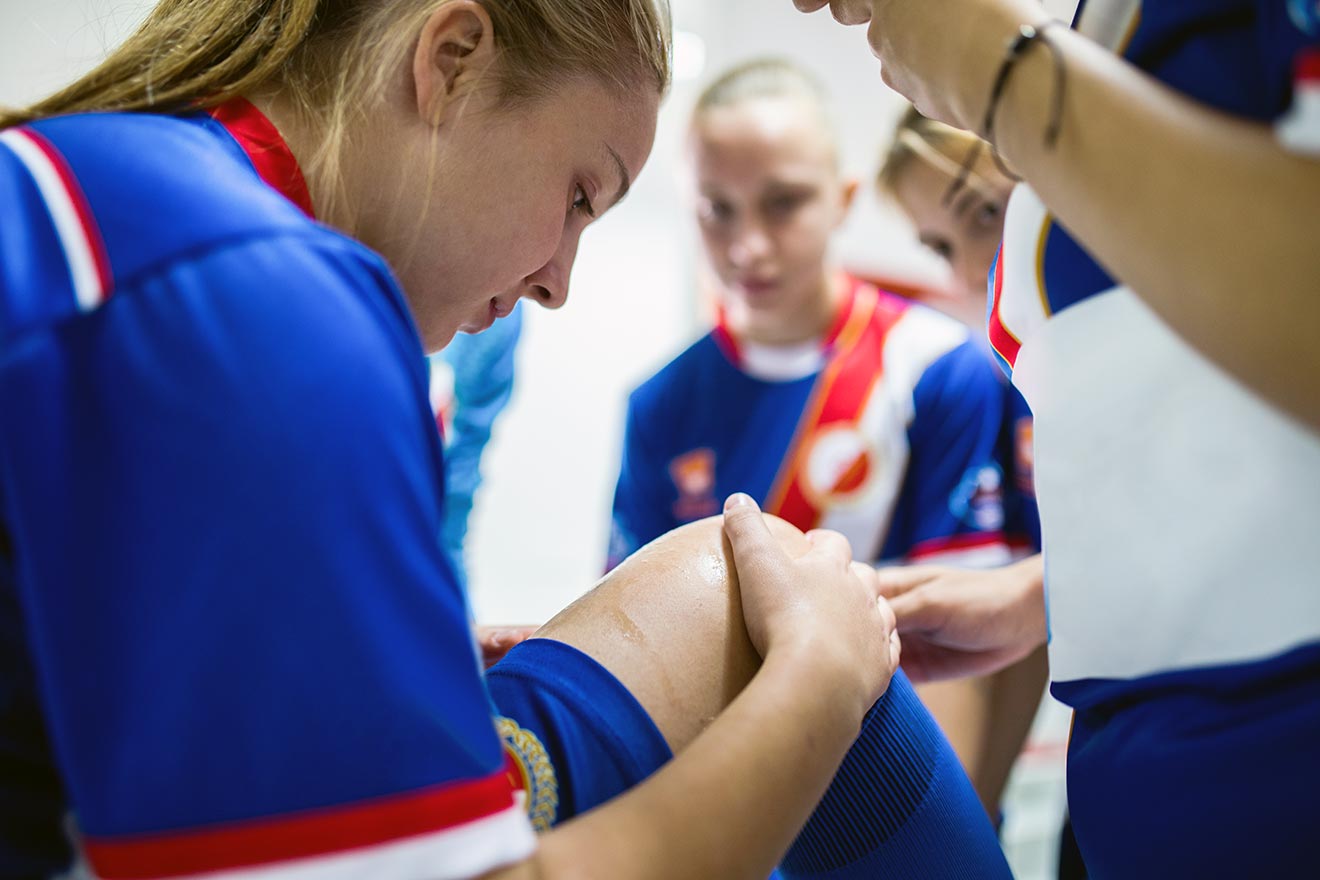 With more and more young athletes participating in sports each year, injuries to the anterior cruciate ligament (ACL) of the knee have become quite common. Youngsters, particularly during the period of rapid growth—generally around age 12 for girls and 14 for boys—are at increased risk for ACL tears. For various reasons, adolescent girls may be 3 to 8 times more likely than their male counterparts to tear their ACL. Fortunately, new injury prevention programs have emerged that can help at risk athletes, particularly adolescent females, to avoid ACL tears.

Knee anatomy and the ACL

A narrow intercondylar notch of the femur or notch stenosis (narrowing) as well as variations in tibial plateau (the upper surface of the tibia within the knee joint) anatomy, such as an increased slope, can lead to pinching of the ACL by the femur and possible rupture. Also, by adolescence, females have a wider pelvis than males and thus a greater Q-angle or angle of hip-knee alignment, concentrating more force on the ACL and increasing the likelihood of a tear.

Moreover, during their developmental phase, females exhibit less neuromuscular maturation along with greater inner knee rotation and valgus (knock-knee). They also have a greater ground reaction force—the force exerted on the body when landing a jump. Furthermore, young female athletes have less strength in proportion to bone size in the muscles that stabilize the knee than male athletes, yet experience the same twisting and loading forces on this joint. Lastly, hormone fluctuations may cause the collateral ligaments to become looser at certain points during the menstrual cycle and so unable to absorb the stresses placed on them, putting the ACL at risk of injury.

Modifiable risk factors for ACL tears include neuromuscular imbalances and deficiencies. Traditionally, boys have participated in sports, such as soccer, that involve twisting movements at an earlier age than girls. By adolescence, they may have developed the muscle coordination and reflexes needed to protect the knee while girls may have neuromuscular imbalances and deficiencies—such as knee ligament, muscle, or overall leg dominance, as well as various muscular weaknesses—that can make them more prone to ACL injuries.

Ligament dominance is a condition that results in decreased medial-lateral (side-to-side) neuromuscular control of the knee joint. This neuromuscular deficiency can lead to valgus collapse, or medial displacement, of the knee and possibly to an ACL tear. Quadriceps dominance—a condition where the quadriceps muscles in the front of the thigh overpower the hamstrings in the back of the thigh—can cause excessive anterior translation, or forward slippage, of the tibia and strain the ACL.1 Leg dominance, which predisposes the nondominant leg towards valgus collapse, can also be a factor in sustaining ACL injuries.

Weaknesses in the gluteal (buttocks), hamstring (back of the thigh), and gastroc soleus (back of the calf) muscles can lead to a valgus collapse and consequent ACL strain, especially during a jump landing.2 Moreover, weak core (abdominal and mid and lower back) muscles mean an unstable pelvis, resulting in too much lateral trunk motion and pronation (inward rolling of the feet), and thus increased risk of an ACL injury.

To train athletes to resist injury, prevention programs have been created. Prevention programs for ACL tears focus on neuromuscular imbalances and deficiencies. While each program has its own specific regimen that combines plyometrics (jump training that makes the leg muscles exert maximal force in a brief amount of time in order to increase speed and power) with conditioning and strengthening exercises,1 all of them concentrate on developing more appropriate landing techniques along with better balance and stability in the lower extremity. For teens, the most effective regimens are those that implement neuromuscular training and emphasize plyometrics and strengthening both preseason and in season.

While not all studies have shown a reduction in ACL injury for their particular study group,3 the bulk of evidence indicates that these programs can work.1, 4 One study reviewing several prevention programs saw a 52% risk reduction for ACL tears in females, and for males the rate was even higher at 85%.4 Two programs that have been shown to significantly reduce ACL injuries in females are Sportsmetrics and Prevent Injury and Enhance Performance (PEP).5, 6 With all prevention programs, it should be noted that success depends largely on the athlete’s degree of compliance.1 As prevention is still the most efficient and cost-effective method to avoid ACL injuries, screening for at-risk athletes has been considered.

Over the past 30 years, ACL reconstructive surgery to stabilize the knee and lessen further damage has advanced considerably. While such progress has led to improved outcomes that potentially allow the athlete to return to play, it has also heightened expectations. Affected athletes must realize that they may still have limitations after ACL reconstruction. In their study, Ardern et al. showed that among athletes with ACL injuries, 82% returned to sport. But only 63% to their pre-injury sport, and just 44% at a competitive level. Furthermore, the knee with the ACL tear has been shown to be more likely than the uninjured knee to develop arthritis.7

The best cure for an ACL Tear

An ACL tear can be a significant life-altering injury for a young athlete, and teens, particularly girls who participate in sports, are at increased risk. While more research is necessary, appropriate ACL injury prevention programs have been showing to reduce the overall number of ACL tears. As with all types of injuries, prevention is the best cure. Such programs should therefore be seriously considered before a young athlete suffers an ACL tear.

At Hughston, our staff is strictly adhering to CDC and OSHA guidelines for the safety of both our patients and our staff. We are diligent about washing our hands, sterilizing medical instruments, and disinfecting exam beds/rooms after each patient use. We are limiting our waiting room volume by regulating visitors and screening patients and employees prior to entering our facilities.

If you are experiencing fever, upper respiratory symptoms, gastrointestinal symptoms, cough or shortness of breath, have experienced any of these symptoms in the past 10 days, or have had contact with a person with suspected exposure to COVID-19, please notify our staff so that they may schedule/reschedule your appointment accordingly.

For more information and latest updates from the CDC, go to: https://www.cdc.gov/coronavirus/2019-ncov/index.html.

For same day appointments, please call our office!
Find a location nearest you!